IP (Internet Protocol) specifies the technical format of packets and the addressing scheme for computers to communicate over a network. Most networks combine IP with another well-known protocol called Transmission Control Protocol (TCP). In simple words, IP is something like postal which take the packet from one place to another and drop it to the destination. However IP is the technology to transfer the packet and it needs some connection before starting the communication, and there comes the term TCP/IP. There are two versions of Internet Protocol (IP): IPV4 and IPv6. Ipv6 is the new version of IP, which is developed because of the limitation of the IPV4. 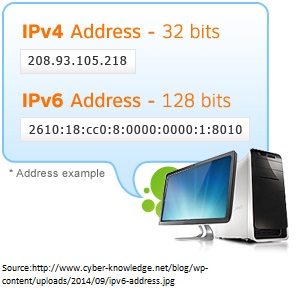 Addressing in IPV4 and IPV6

IPv4 is a fourth version of the internet protocol used to identify devices on a network through an addressing system. It uses a 32-bit address scheme allowing that the total number of 2^32 addresses can be assigned to the network devices. An IPv4 address is a 32-bit number consisting of four octets (8-bit numbers) in decimal notation, separated by periods. The bit can be either a 1 and a 0 (two possibilities), therefore the decimal notation would octet 2 raised to the 8th power of various options (256 of them, to be exact). Since we start counting from 0, the possible values of a byte in an IP address range from 0 to 255. Example of IPv4 can be192.168.1.1/24, where /24 is subnet and is equivalent to 255.255.255.0  Also called  CIDR ( classless inter-domain routing), this is required to allocate and specify the internet addresses used in inter-domain routing more flexible than with the original system if Internet Protocol address classes.

On the other hand, IPV6, also called IPng(Internet Protocol next generation) is the newest version of internet protocol. It is the evolutionary upgrade to the IPV4, so it is correlated with IPV4 for some time. IPv6 is 128-bit addressing schema. That means it will have 2^128 address. It is more than enough for any network device in this world to give the single unique IP to each.

While increasing  the pool of addresses is one one of the most often-talked benefit of IPv6, there are other several changes that make IPV6 superior: